skip to main | skip to sidebar

VIVA LA MEGABABES﻿
Shampoo were once described as the Barbie doll equivalent of the Sleaze Sisters from New York punk movie, Times Square --- a description which goes some way in summing up their appeal as a mixture of glamour and mundanity, spite and sweetness, clever manipulation and dumb naivety, and most of all, the collision between pop and punk.  In a sense, Shampoo were in a tradition of bleached-blonde pop-punks like Debbie Harry or Wendy James. 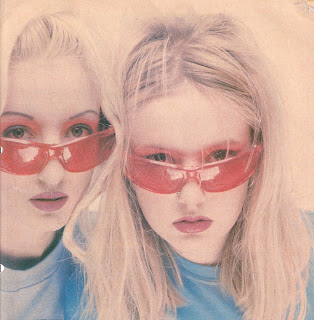 Jacqui Blake and Carrie Askew were two teenage schoolfriends from the South London suburb of Plumstead.  They bonded over a love of music and retreated into fandom and glamour as an escape from their mundane surroundings.   They became known on the London scene for their peroxide punk babydoll kitsch look (which was later to spawn an army of imitators) and they wrote a fanzine for Manic Street Preachers called Last Exit which blended Sylvia Plath quotes with collaged images of Kylie or Bardot.  They had a cameo appearance in the video for Little Baby Nothing and began to get several mentions in the press.  Deadline magazine described them as a performance act looking for an outlet and made it clear that they'd designed themselves as a pop group.  The girls were always quite clear that they couldn't play instruments or write music but they knew what they wanted and how to get it.  In the same Deadline interview, Jacqui was quoted as saying, "If anyone's manufacturing us, it's ourselves.  We knew what we wanted and set out to meet the people who could help us create it --- a raw punky glamorous band."
Bob Stanley from St. Etienne signed them to his record label, Icerink, after they sent him a mixtape featuring some of their favourite songs such as The Waitresses' I Know What Boys Like (which they went on to cover themselves).   They released 2 singles --- Blisters and Bruises (co-written by Lawrence from Denim) and Bouffant Headbutt (co-written by Con Fitzpatrick who wrote all the music for their songs from then on).  The singles got good reviews and Bouffant Headbutt, in particular, had more a punk sound.  People forget but when Shampoo first started they were seen as more of an indie band than a mainstream pop act.  In their interviews, they raved about 60s pop like Brigitte Bardot and 80s strangeness like Grace Jones or Adam Ant alongside indie bands of the time like Cornershop or the Manics.  But like Blondie and Transvision Vamp before them, the music press didn't know how to treat blonde pop babes who loved short skirts as much as the Sex Pistols.
Shampoo signed to Food (a subsidary of EMI) and released 2 albums for them, this one and Shampoo or Nothing (which popularised the phrase Girl Power before the Spice Girls).  They released a 3rd album via the internet before splitting up.  Although they'd had only moderate success in the UK, they were one of the biggest selling acts in Japan and made more than enough money to retire on.  Their later albums concentrated more of the childish pop element of their sound and increasingly their interviews seemed to appeal to a more mainstream audience as they obsessed about their love of East 17 and Take That, Barbie dolls and sweeties.
This reissue of their 1st album represents that moment where they balanced their pop and punk sides (although it is still more pop that it could have been/should have been).  The girls squawk and shriek, snarl and pout over catchy pop numbers echoing both the boring mundanity and rampant egotism of teenage life.  The songs are as sweet and light as candyfloss but dig a little deeper and you'll detect a sharper edge.  There are no love songs on the Shampoo album --- only songs mocking those that buy into the myth of romance, laughing at the too-cool-for-school indie boy scenesters around them and singing the praises of "running wild in the city late at night" and not caring what anyone thinks.  Surely lines like --- Everyone hates us/We don't care/Who needs friends anyway? --- wouldn't sound out of place being sneered by Johnny Rotten.  And wasn't Dirty Old Love Song merely a simpler version of the ethos behind the Manics' Motown Junk --- "songs of love echo underclass betrayal".  And is it just me or does Game Boy have a subversive double meaning?!

While it's true some of the album tracks are fillers, the reissue has added 6 bonus tracks (the B sides to the singles off this album, a couple of which were only available on CD releases) which have the petulant brattiness and kitsch sweetness that made Shampoo such a great band.  Although it is a pity they didn't include their 1st two singles and the B sides from them, this album is still a great introduction to a duo described as part Lolita/part Children of the Damned.  Shampoo --- a band that so perfectly embodied teenage glamour and pop culture that they could have been an Andy Warhol creation (if their essential Britishness didn't evoke more St. Trinians than Manhattan Factory).
﻿
ORIGINALLY PUBLISHED IN MAY 2008.
SHAMPOO PHOTO FROM ID MAGAZINE
Posted by PussyRock fanzine at 11:50

PussyRock fanzine
This blog is an archive of reviews/interviews/articles that have appeared in my fanzine PussyRock. I always try to obtain permission for any images I use on here. Sometimes I use images that are in the public domain. If you are the copyright holder and you would like to be credited or have your image removed please contact me (see my profile for more details) and I'll be happy to do this. I am not a professional writer but I have been writing/editing my own fanzines since the mid 1990s. This blog contains work from my fanzine, PussyRock. I'm not sure what's happening with this zine at the moment so I'm currently NOT accepting items for review/interview requests so please do not contact me regarding that.